Core 4a: Molecules in Action

Question 1 - answer each question in a separate booklet

carbon, oxygen, nitrogen and hydrogen as the major components of biological molecules such as proteins and nucleic acids.

the thermodynamic basis for the stabilisation ofthe fold and describe the interactions involved.

(c)         The figure below shows the results of a gel electrophoresis experiment run at pH 7. It compares a wild type protein (Lane 1) with four variant proteins with amino acid residue substitutions.

Giving your reasoning in each case, identify the lanes associated with proteins (4)

Note: amino acid structures are given in the databook. 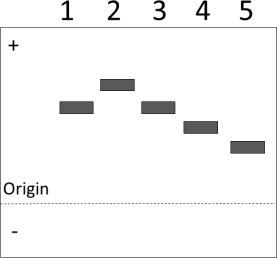 (d)         The sequence below is of a segment ofmessenger RNA that includes a STOP codon at the end ofthe coding sequence of a monomeric protein X.

forms dimers under oxidative conditions.  Sequence analysis shows that the messenger RNA sequence is altered to:

Answer two questions from this section

Question 2 - answer each question in a separate booklet

materials shown below.  Your answer should show the retrosynthetic analysis and the forward synthesis, indicating suitable reagents, and identifying any steps that are         stereoselective.

Note: more than one synthetic step is required.

(i)          Suggest reagents for converting phenol (PhOH) into 5 in 2-steps and explain (3) how your approach gives the correct regioselectivity.

Question 3 - answer each question in a separate booklet

(a)       Compound 4 can be synthesised from dimethyl hexanedioate, 1.

reagents and show a curly arrow mechanism for the conversion.

Note: more than one step is required.

For both reactions give suitable reagents and draw curly arrow mechanisms. (6)

(c)       Give a full retrosynthetic analysis to show how 7 can be synthesised from 8, 9 and 10. (5) Using your retrosynthesis, show a forward synthesis giving suitable reagents for each step.

Question 4 - answer each question in a separate booklet

solubilities of CO2 at:

the pressure you calculated in part (a)(i).

(b)       A lake in Africa suddenly released CO2, a phenomenon termed limnic eruption, when the

bottom lake waters were destabilised and ascended to the surface.  The area ofthe lake was 1.5 km2 and its depth 100 m.

3 .  Assuming that the density ofwater is not

affected by pressure, calculate the moles of CO2 released from 1 m3 ofwater when it transferred from the bottom to the surface ofthe lake.

calculate, in moles, the total amount of CO2 released from the bottom 1 m layer ofwater in the lake when it was transferred to the surface ofthe lake.  Hence,    calculate the volume ofthe CO2 released under atmospheric pressure at 300 K.

(c)       A propane tank, when exposed to fire, poses a serious risk of explosion.

required at 100 oC under liquid-vapour equilibrium.

(iii)        Giving your reasons, briefly discuss whether the temperature-dependence of (2)

vapour pressure is steeper for butane or for propane.