● This assignment contains ONE question with Two parts. You are required to submit a complete C++ program (.cpp only) for each part on PASS before the deadline.

● You can submit as many times as you want before the deadline, and we will grade your latest version.

● Only a small set of the test cases are visible for the testing, and a more comprehensive set of test cases will be used for grading. In other word, passing all the visible test cases does not mean that you can get full mark for this assignment. Try your best to thoroughly test your program. Hidden test cases will not be released.

● The marking of each question is based on the percentage of the total test cases that your solution can pass. If your submitted solution leads to a compilation error on PASS, zero mark will be given to that question and no manual checking to your solution is provided in such a case.

● No late submission will be accepted. ALL submission should be on PASS.

● Plagiarism check will be performed.

● You should ONLY use the library <iostream> and <cstring>. You are NOT ALLOWED to use objects from <string>.

● To ensure timely feedback to the students’ questions, each of the following TAs will be responsible for one question. If you have any questions, you can contact the corresponding TA directly.

In this assignment, you will write a C++ program that can perform a simple UNO game (a kind of card game) under the following encoding scheme.

Part A. Initializing a Sequence of Cards

Your first task is to write a program that can initialize a sequence of cards, which is used for playing the simple UNO game. The program takes one integer from the user and it is the seed for the card sequence generation. As shown in the following Table1, the value of seed is from 1 to 20, and each seed corresponds to one specific sequence. Then it prints the entire sequence of cards. We provide a skeleton of code in the file asg3_skeleton_partA.cpp, and you need to complete the program.

Now to begin, a card has three attributes: color, value and number. There are 4 colors with their corresponding values: Red with value 1, Yellow with value 2, Blue with value 3 and Green with value 4. There are 9 numbers: the integers from 1 to 9. A card is combined with one color and one number randomly, such as Red3, Yellow3, Blue7 and Green 1.

A class called Card is provided in the skeleton code, with the above attributes defined as private members. Color is a pointer to char, i.e., char *, or equivalently cstrings. Some access function prototypes are also defined. There is also a prototype of the default constructor. You need to implement these access functions and the default constructor in order to complete the class definition of Card.

To initialize a sequence of cards, you need to implement one function. A sequence is simply an array of Card objects as you can see in main(). The initSequence(Card* cardSeq, char colorName[][10], int* j, int* num) is the function to initialize the sequence of cards. For one sequence, there are 6 cards. When you create each card, you should first set its value and its color according to the value as shown in Table1. Then, combining the color with the number, you can get a card. Note that the sequence is passed to the function as a pointer (Card*), and you should not change this.

We provide a help function called printSequence which simply takes the sequence (again as a pointer) and prints each Card object sequentially. This is called in main() to check output of your code.

1. Based on skeleton code, complete the class definition of Card.

2. You are not allowed to delete any part of the skeleton code.

3. Do not add / move attributes or member functions.

4. Finish all the default constructor or functions. 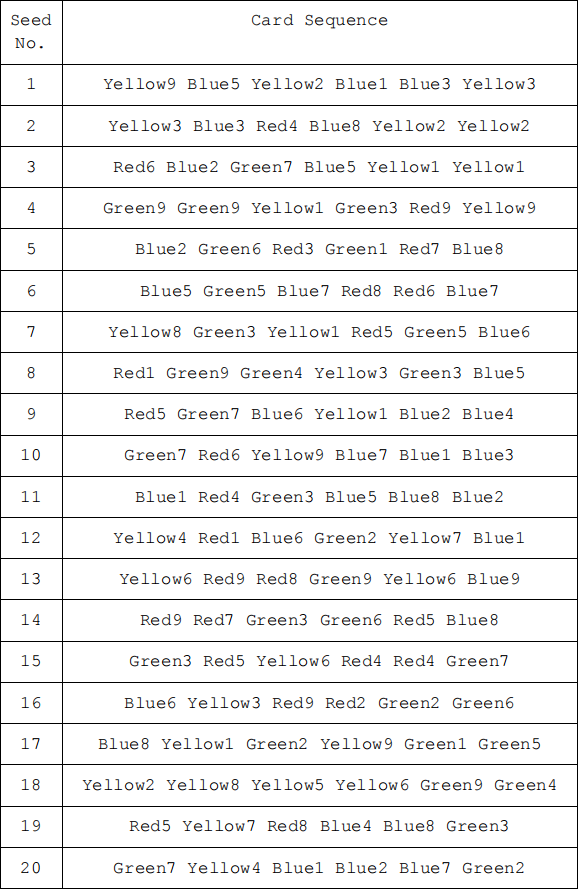 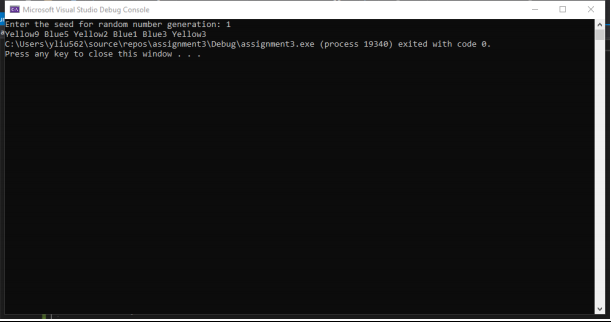 Extend your program in Part A, so it can play the simple UNO game with you as the only player. We provide a skeleton of code in the file asg3_skeleton_partB.cpp, and you need to complete the program.

The game is follows. At first, the program asks the user to input the seed for the card sequence generation. It initializes a sequence of cards which are your cards, just like the basic level. Then the game starts.

In the first round, the default function in skeleton code will call the function you designed in part A and initialize following specific sequence of cards for computer ([Red1 Green9 Green4 Yellow3 Green3 Blue5]). Then the computer will show you the first card in its sequence.

In the fourth round, the process will be the same as the second round.

In the fifth round, the process will be the same as the third round.

Some sample runs of the game are shown below. Note your program output should be exactly the same as the sample output below, using the same seed.

3. If there is no suitable card for you to play, please input 0 0 and then the game will end.

4. If there are some suitable cards for you to play, but you do not play any one of them, you will lose. 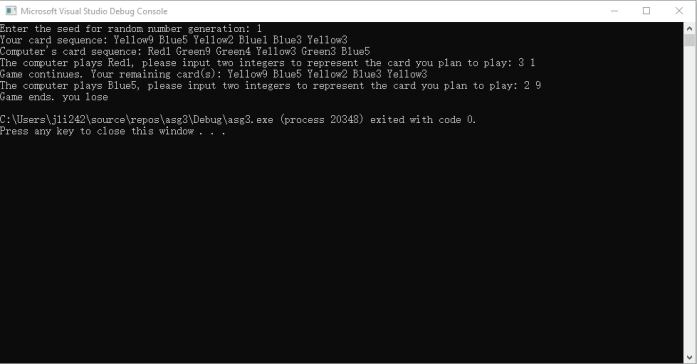 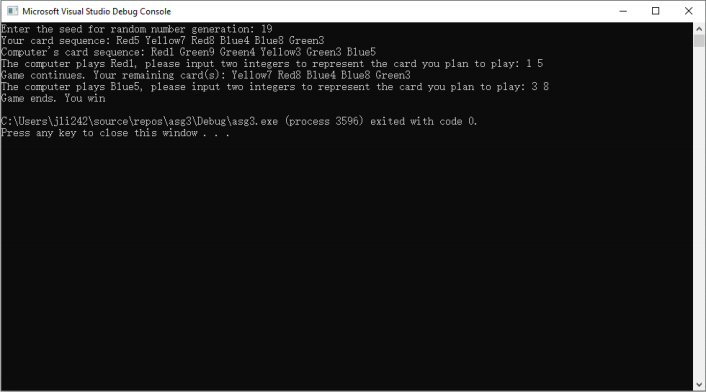 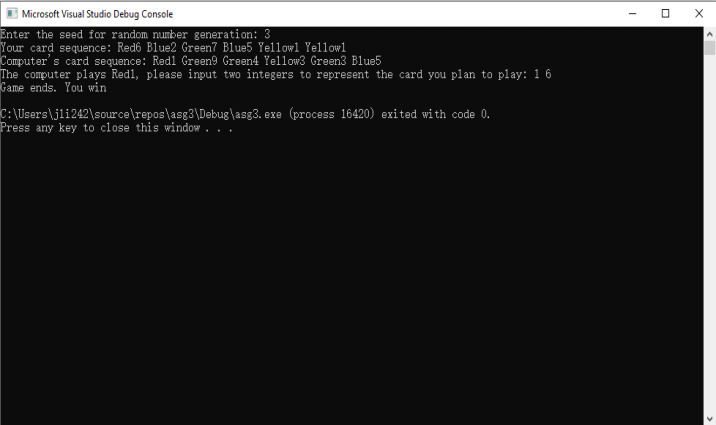 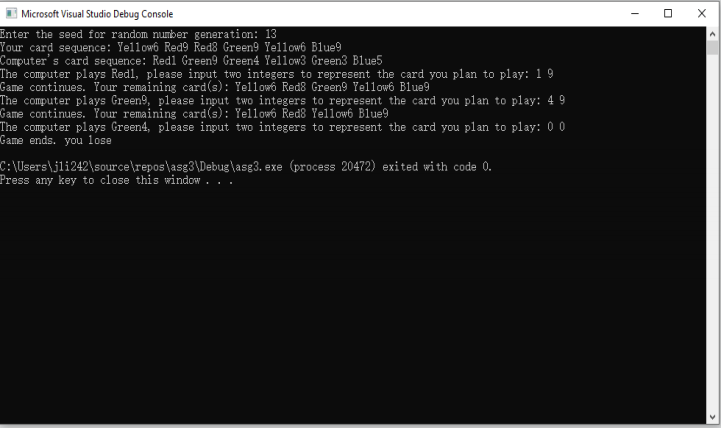