Marking of this Assignment

A full mark of 20 on this assignment is worth 10% of the total marks for MATH3171. Present your work as a self contained, well-written report including the problem statement, solution summary, model formulation, definition of problem variables and your computer output. State clearly the assumptions that you make. Any Matlab files that you used to solve the assignment problems should be either included in the appendix or submitted to Moodel.

Formulate this as a linear programming problem and solve it using Matlab. Find out an optimal solution, the associated minimal cost and interpret your results. Either provide the Matlab code in the Appendix or submit the Matlab file to Moodle.

During the past few months, the suburb Surrey has suffered from a series of break-ins and thefts during the night. The city council of Surrey decides to install surveillance cameras in this suburb to improve the security. These cameras can be directed and pivot through 360◦ . By installing a camera at the intersection of several streets, it is possible to survey all adjoining streets. The map in the following Figure shows the streets need to be covered by the closed circuit TV (CCTV) surveillance and the 49 possible locations where to install the cameras. Here, we interpret a street as the arc in the map linking two possible locations of the cameras without having a third possible location of the cameras in between (for example, the arc between location 22 to location 25 is one street, while the arc between location 25 to location 26 is another street). 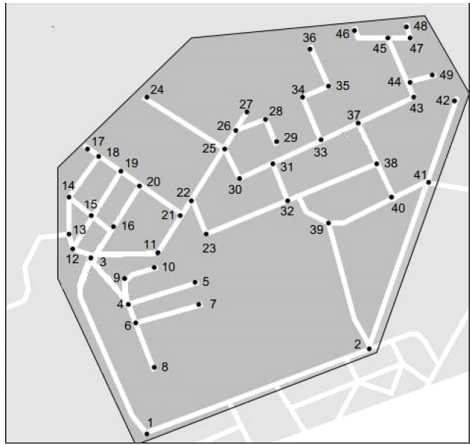 The costs of installing a new cameras at the possible locations 1 − 49 are listed in the following table:

The city council would like to minimize the total cost of installing cameras and make sure every street can be surveyed by at least one camera.

(a) Formulate this CCTV surveillance problem as an integer programming problem and solve it using Matlab. Find out where these cameras should be placed and what are the corresponding total cost.