This assignment tests your understanding on GUI, Java Socket Programming and the application of multi-threading.

In this assignment, you are going to implement a two-player Tic-Tac-Toe Game. The game would only start when the Tic-Tac-Toe Server runs and two players are connected to the server. When the game starts, players need to input their player’s name first (i.e. the player cannot make any move if he/she does not enter his/her player’s name) (Fig. 1). Players are not allowed to re-input their names again once they have submitted their names (i.e. the textboxes and the submit buttons should be disabled). In addition, their names should be displayed in the frame’s title (i.e. change from Tic Tac Toe to Tic Tac Toe-Player: (player’s name)) and the message title (located below the menu bar) should change from “Enter your player name…” to “WELCOME (player’s name)” (Fig. 2). Initial setting: 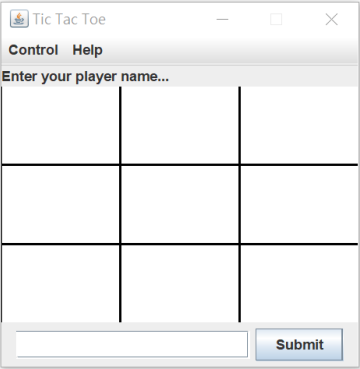 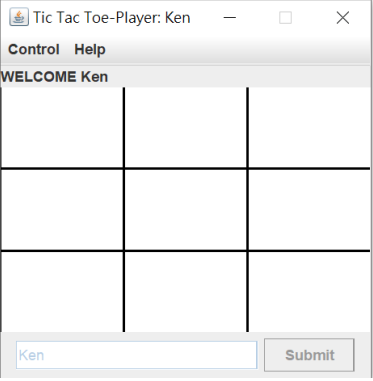 Fig. 4
Criteria for a valid move:

- The move is not occupied by any mark.

- The move is made in the player’s turn.

The game would continue and switch among the opposite player until it reaches either one of the following conditions: 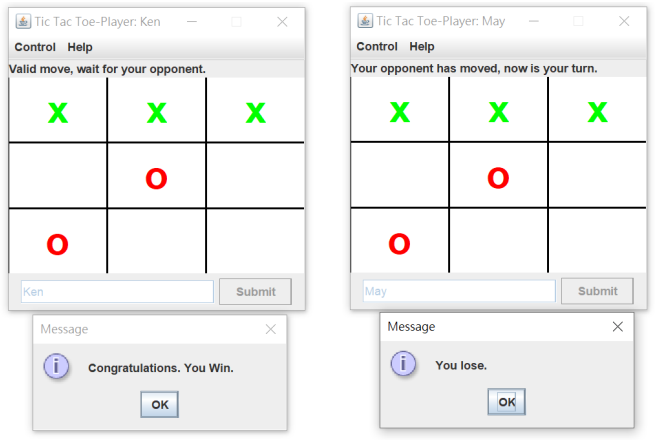 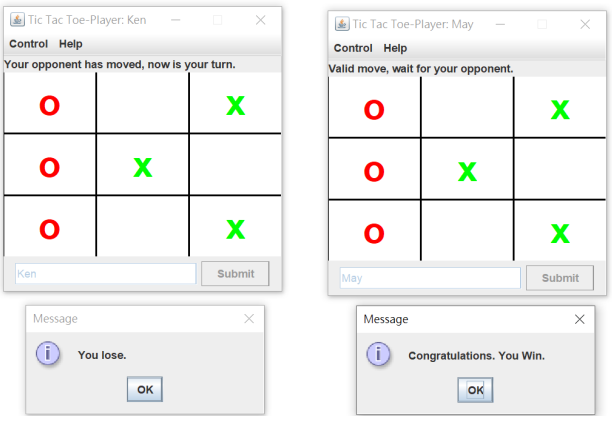 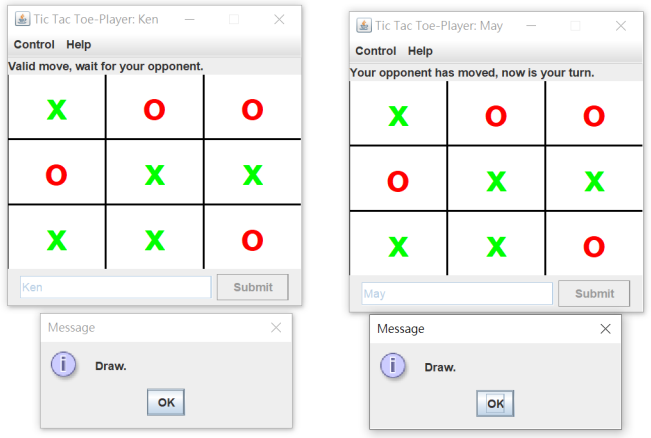 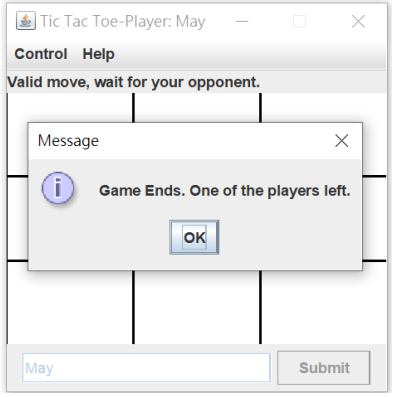 Fig. 8
Besides, as you can see in the screen captures, there is a JMenuBar which consists of 2 JMenu, named Control and Help (located above the message title). In the JMenu of Control, it consists of a JMenuItem, named Exit while in the JMenu of Help, it consists of a JMenuItem, named Instruction (Fig. 9 & 10). When the player clicks “Exit”, he/she would exit from the game and the game would be terminated immediately. When the player clicks “Instruction”, a Dialog Frame consists of some game information would be displayed (Fig. 11).

Fig. 11 Important notes for the assignment:
1. In this assignment, you can assume both the server program and the client programs run on local host (i.e. with IP address 127.0.0.1).

2. You can have your own design but you must include the GUI components as shown in the above screen captures and all the functionalities described in this document should be implemented. To ensure your program has implemented all necessary functions, please refer to the marking scheme below as for your references.

3. This assignment will be marked by features (Your code would not be investigated). You are required to write JavaDoc for all non-private classes and non-private class member functions. Programs without JavaDoc will lead to mark deduction. However, you don’t need to generate JavaDoc htmls. Just write comment blocks in your source program.

5. Please submit all files in a single compressed file (in .zip or .7z) to Moodle. Late submission is NOT allowed. Do NOT submit .class files. Marking Scheme: